We all probably know someone who has started saying some strange things, believing ideas they never would have bought into before. Well, we now have some answers.

I was at a party with a bunch of friends, and we were talking about the rising antisemitism and attacks on Jewish people around the world (I’m fun at parties). Everyone was saying they were appalled, worried etc. Then I hear a wee voice in the corner “Yeah, it’s a worry, but only for the real Jews”.

I’m not sure anyone else heard it. The convo moved on like nothing had been said. And I’m not sure if anyone else picked up on what it meant. And in all honesty, I wouldn’t have known what that particular dog-whistle was even a year and a half ago either.

A year and a half ago I was beside myself, watching loving, community minded, left-leaning friends start to turn to Q.

QAnon is a conspiracy theory-of-everything that started on 4chan (a cesspool of an imageboard) in late October 2017, before moving to the cesspit of 8chan (the cesspool of 4chan’s cesspool) in January 2018. The anonymous poster (Anon) called Q claimed to be an insider on the Trump administration, spreading information to the masses in “Drops”, posts to the image boards. The first was that Hilary Clinton was about to be arrested. Her crimes? Well, she’s part of “the cabal”, a blood-drinking paedophile ring, like most democrats and people who were vocally anti-trump (which is not true).  This is all a rehash of blood libel – the ancient conspiracy that Jewish people steal children and drink their blood. It’s anti-Semitism all the way down.

I would see these friends start with Plandemic, then Save The Children, Fall of the Cabal, then taking the side of abhorrent right-wing-racist-American-pundits (and THAT politician), all the way to calling for people to be punished for these imaginary crimes.

And this was happening where I make a living – on Facebook. 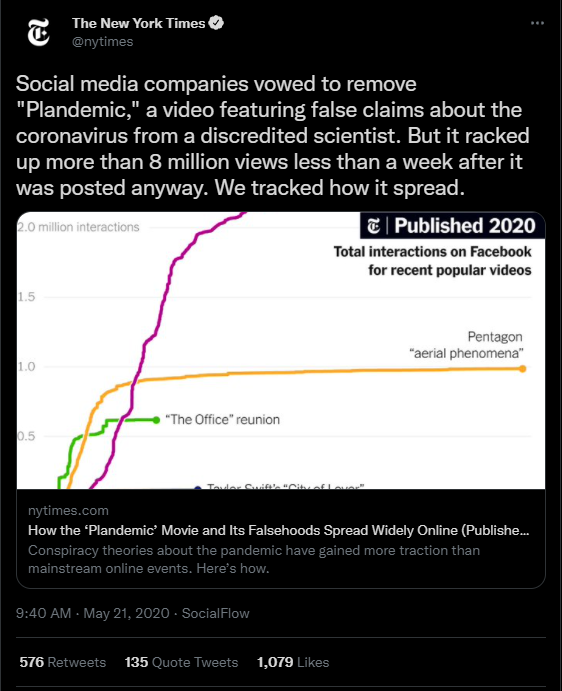 Save the Children was QAnon’s first real foray into the real world without the branding. QAnon claims that hundreds of thousands of supposedly missing children are being kidnapped by an elite child sex trafficking ring comprised of Democratic politicians and celebrities. I mean, who couldn’t get behind the slogan “Save the Children”? Child trafficking is real. It is a problem that needs real solutions, but the number of children that people were touting being traffic each year was far past real numbers. And this “support” blocked phone lines for weeks at the not-for-profit Save the Children, preventing the charity from doing real work. 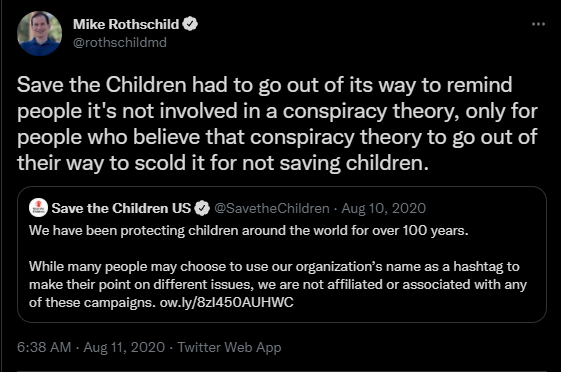 Mike Rothschild points out the hypocrisy of the Save Our Children movement. See thread here.

This led people to confirm their beliefs by “doing their own research” into child trafficking around the world. There, they’d find Fall of the Cabal, an insane 10-part YouTube “documentary” that indoctrinated people into Q. They joined protests filled with Q regalia, Trump flags, and talks of adrenochrome (taken from the blood of scared children (aka blood libel).

These concerned citizens fell into the latest moral panic, and blasted it all over social media with a reach that Khloe Kardashian couldn’t even dream of.

Facebook encourages outrage. It’s algorithms pick up things that make people mad – people mad people DO something. They react, they comment, they share. They do not stop to look at whether any of it is true. You know, like that game of Whispers that we played as kids.

THIS THREAD IS A MUST READ! Have a giggle and learn something at the same time.

In the last month, disinformation researchers were finally vindicated for their blame of the Facebook algorithm for radicalising people world over. The story of Carol is stark.

Facebook tested how their newsfeed works on a fresh profile of a middle-aged Christian, Conservative, middle American woman named Carol. She followed Trump, and Melania, and Fox News. In two days she was being recommended QAnon groups. And in one week? Actual hate speech.

Facebook took too long to do anything about the spread of misinformation on it’s platform, while publicly saying they were dealing with it.

They could have done something – anything.

While my job is on Facebook, helping small business thrive in a digital world, I sincerely would prefer people spent less time on the app, and unindoctrinated into a racist online conspiracy cult. Families have been ripped at the seams. Many will never repair. 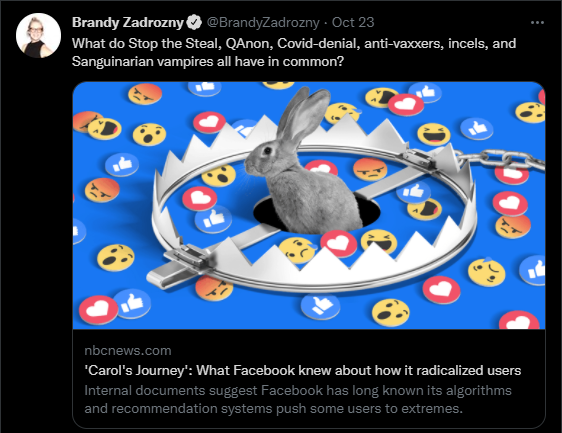 Back to my friend from the top. See, this friend of mine fell down the rabbit hole many years ago. He always questioned authority, and had questions he felt people couldn’t. or wouldn’t answer. Five years ago, Pizzagate came around, flooding people’s newsfeeds, then QAnon. He became a full-on satanists-drinking-children’s-blood-democrats-liberals-are-to-blame Q believer.

After January 6 this friend got on to Telegram where actual Nazi’s were waiting to indoctrinate the Q believers after the great FB/TW purge. It’s true – neo-Nazi Telegram groups were discussing the best ways to bring over disillusioned Q believers while they were are their most vulnerable. It worked.

He’s a holocaust denier now and has swallowed the “we’re not anti-Semites! We only hate fake Jews (aka The Cabal)” line so common in actual Nazi circles before they get to the last level of that rabbit hole.

Somehow, I feel like I’ve failed him – friends shouldn’t let friends become anti-Semites. But I know, actually, Facebook failed him. And his friends. And the many people who have strained or broken relationship through the misinformation fed to people during a pandemic. And mostly, those who can never mend those relationships through covid, vaccine denial, and death.

My heart breaks. This (!) is why we cannot ignore that weird thing our friends just said, or write conspiracy people off a “dumb” – the right words and he right moment now could stop evil from growing and seeding in our communities.

All I can do is leave you with this:

Know, know, your newsfeed IS being manipulated.

Encourage your family and friends to get vaccinated.

Be kind, and punch Nazis.